The Tv Is Dead, Long Live The TV

Television. I think we can pretty much all agree that it’s great. It’s so great, in fact, that we’ve been not only watching it but organising our homes — and, to some extent, our lives — around it for roughly the last hundred years.

Over that time, TVs have gotten bigger, they’ve gotten better and, particularly in recent years, they’ve gotten smarter. As erstwhile members of the household they’ve come to know us intimately. To understand our quirks, our needs and our desires. In that vein, it’s hardly surprising that so many of us – myself included – grew up in homes where the furniture pointed defiantly screenward.

For my parents, now in their 60s, this was about excitement: television as a fixture of every household was still a relatively new concept and, particularly so far as their own parents’ feelings went – a generation born before the machine itself – the exhilaration of its novelty had not yet in any way worn off. In a sense, too, TV was still about landmarks: when the family gathered around the set it seemed like anything could – and would – happen. Two generations, perfectly in sync about something for once, leaned in like Scout troops over a campfire, eager not to miss any detail of whatever gruesome or ghostly tale was being delivered that night. 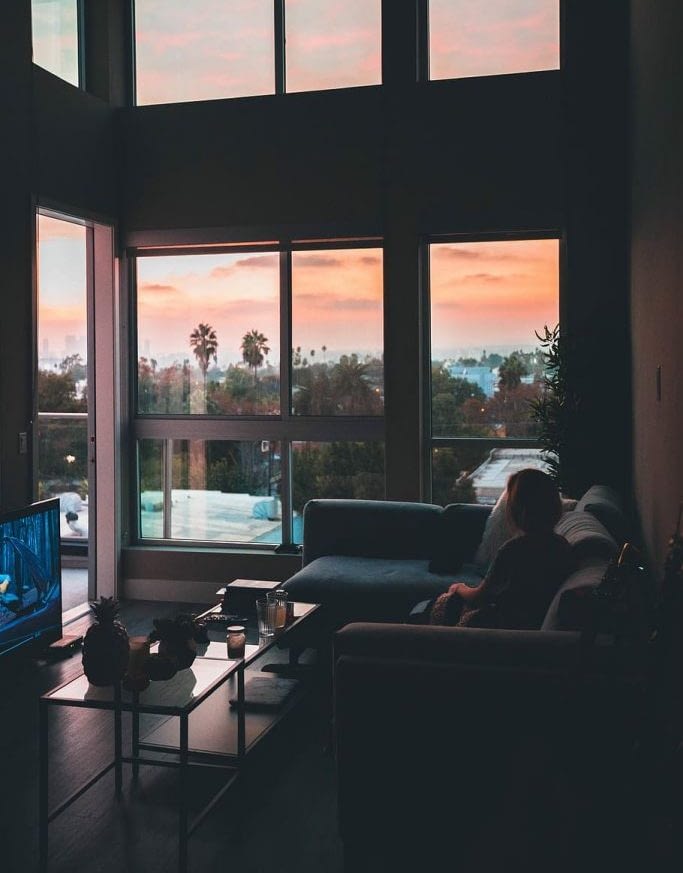 For me, as a child, a teenager, and – now – a thirty-year-old adult, there is still some of that excitement: prestige TV reigns supreme. We are, as they say (and have been saying now for some time), in a Golden Age for home entertainment. But, as much as the thrill of watching something good for the first time is still a powerful feeling, the device itself – despite the many advances that have happened even in only my lifetime, encompassing everything from flatscreens to 4k – has lost some of its own magic. Now, I have two sofas in my living room. Yes, one faces the TV. But it also faces the other sofa, and the television itself feels almost incidental.

When it isn’t on, it is all but forgotten: in 2020, television isn’t really even in the television anymore. And perhaps the advent of streaming for Generations Y and Z, occupying a technology-first landscape where laptops are already near-ubiquitous, makes the TV itself an afterthought for digital natives with all the choice in the world already at their fingertips.

But the sidelining of the television isn’t unique to those who sit between the ages of five and forty.

My parents, too, recently redesigned their main living space. While one end still focuses loosely on the TV set – old habits, after all, die hard – the other has become what they cheerfully call their “waiting for god” area: two comfortable chairs and a coffee table that point slightly inward so as to acknowledge one another’s existence, but which, mainly, face the windows and into the garden.
If even they – the first TV-native generation – have (albeit partially) upped sticks and abandoned the television-centric design which has pervaded Western interiors for what is now most of our lives, what’s next for the rest of us?

Scrolling through Twitter the other day, my partner called me over to show me what she deemed to be “our ideal house”: pink cement, plush but spare – something for everyone. But something about in particular caught my eye. A peculiar sunken area, populated with comfortable-looking, inward-facing furniture. A conversation pit. Some brief research tells me that conversation pits were popular over a relatively short period of time, spanning from the 50s to the 70s. Probably as a knee-jerk reaction to the all-consuming nature of television. It also tells me that they’re a royal pain to get rid of if you’re looking to level-out your living area and put something else there instead.

It’s not the most practical solution, of course – and not everyone has the space or the inclination to create an entirely distinct living area just for the purposes of person-to-person interaction. It is an elegant one, though, when properly executed.
However, as the 1980 Jona Lewie song goes, “You’ll always find me in the kitchen at parties.” And it seems that, for the most part and after years of intensive testing, the Lewie Axiom does more or less hold true. With this in mind, the conversation pit does seem like a step or two too far when leaning on a countertop will do, doesn’t it?

But what else, then, can we do, when the television itself has become an overbearing spectre? How do we banish – without completely doing away with – that silent, blank-faced ghoul?

Wall brackets are practical, though outdated: still common in hotel rooms where space is a premium and aesthetics are an afterthought in the design process, they appear far less frequently now than they did in the early 2000s as tube TVs began to slim down and climb from their stands and up the walls like hungry spiders. 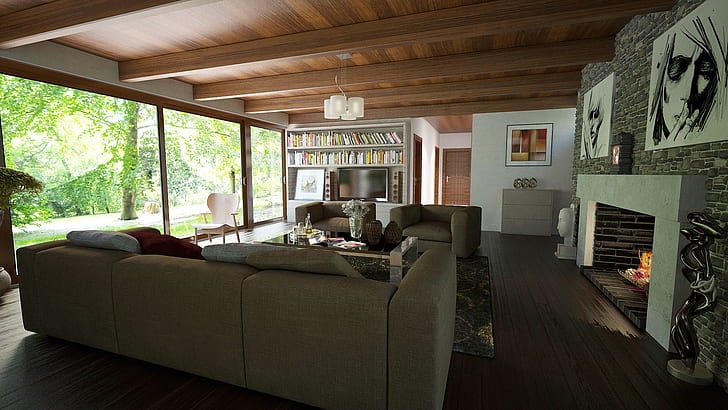 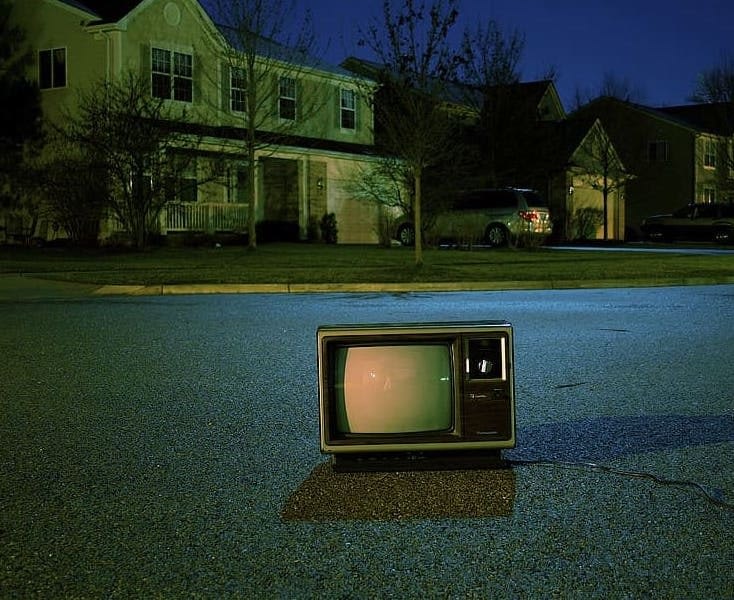 One possible solution comes from technology which has, at least in part, been around for years. And, while it’s nothing new at this point to see a television rise from the hidden depths of a bed frame like an LED sea monster, there’s no good reason that the same couldn’t become common practice for living room furniture. Sideboards, even coffee tables, are just as welcoming habitats for the flatscreen leviathan.
But perhaps this is just a first step along one possible trajectory: maybe it’s the turn of pioneering, rollable OLED TVs to take centre stage – or, rather, to hide in the wings waiting for their curtain call and time to shine. If this technology – which, of course, has far-reaching applications outside of the home entertainment sector – continues to be properly funded, further researched and the creases ironed out could allow the TV to hide in plain sight: not only flush to the wall, but potentially even disguised as part of the decor – whether that’s in keeping with the wallpaper, or dressed-up as a piece of art in keeping with the style of the room.

Or, perhaps we lose the TV entirely. It wouldn’t be the first once-great piece of technology to be disappeared by the sands of times, having outlived – if not its usefulness – its necessity. Admittedly, it’s hard to imagine, if you grew up in the last hundred years, saying goodbye to its warm glow and low, comforting hum.

But goodbyes are never easy.

It’s really not a question of Golden Age-ism – of yearning for an era that only the smallest handful of us can even lay claim to half-remembering. It’s an issue of practically – of smaller spaces and condensed living. In a world where we are constantly surrounded by and immersed in the thunder of the digital mesocyclone – often for better, sometimes for worse – perhaps there is no room for such a relic of technology past.

But, still, I wonder if, when John Logie Baird gave the first public demonstration of his invention at Selfridges back in 1926, did he ever consider that it would have become such an integral part of lives?

I wonder, too, where his furniture pointed.