Smart homes from the screen, guaranteed to make you swoon.

The smart technology which now compliments our homes and our day-to-day lives as though it had always been a part of our quotidian little world once found a more fitting home in the realms of film and television. A spectacle of far-and-near-future possibilities.

But, naturally, good ideas don’t stay in the world of fiction forever.

That being said, the advent of the real-life smart home hasn’t yet put an end to its fantastic counterpart; there are, after all, always new boundaries to push in fiction not yet possible in our more grounded version of reality.

And it’s with both of these points in mind that we offer up this list: seven smart homes from the screen, both big and small, which inspire the twin emotions of awe and jealousy – and which, in some cases, may even have pushed real technology forward with their aspirations.

"The advent of the real-life smart home hasn’t yet put an end to its fantastic counterpart; there are, after all, always new boundaries to push in fiction" 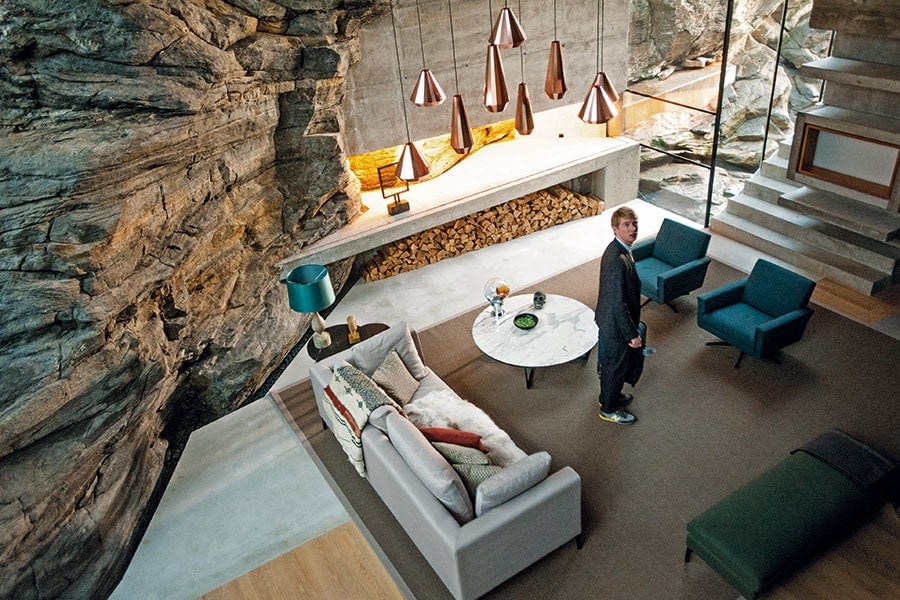 Ex Machina is one of those films that I return to time and time again. Judging by its 92% rating on Rotten Tomatoes, I’m not the only one who does, either.

In my case, though, it’s not just because Alex Garland’s 2014 psychological A.I. thriller is a great movie (and continuation of Jeff Goldblum’s Jurassic Park monologue proving that we have, in fact, learned nothing)  – it’s not even down to the fact that Oscar Isaac and Sonoya Mizuno turn out one of the best and most surprising dance sequences ever committed to celluloid.

No, while those things undeniably all figure in to why I’ve watched this film at least twice a year for the last six years, there’s something else that I keep coming back for. That house. Or lab. Whatever you want to call it. 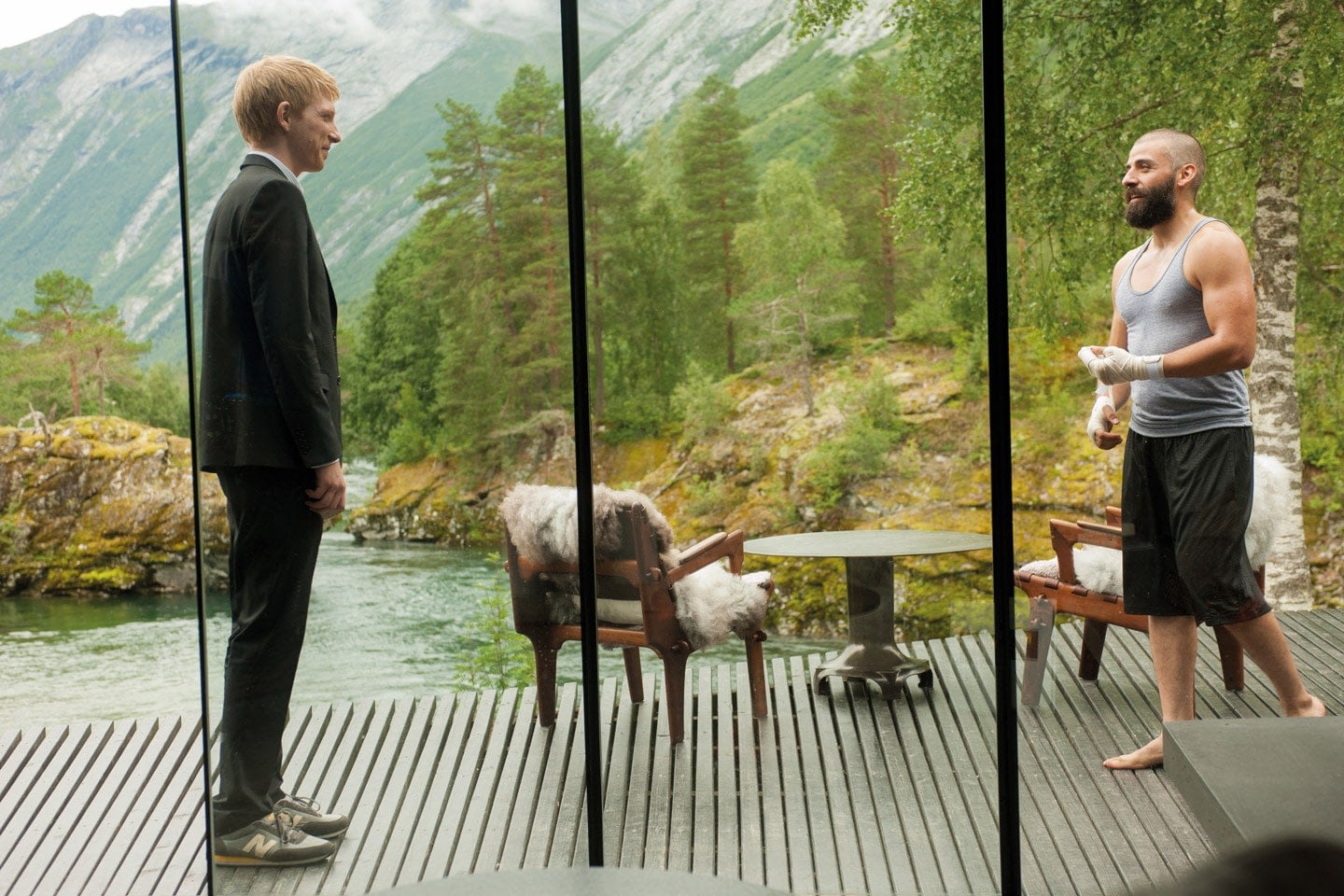 Given that Isaac’s character – the heavy drinking, world-hacking Nathan Bateman – isn’t just a billionaire but, more specifically, a tech billionaire, it’s not surprising that his home-cum-compound should reflect that.

Concrete walls and floors, photoshoot-perfect minimal decor, key cards for every room, glass walls that let in envy-inducing amounts of light and reveal a sprawling wilderness that extends (we assume) beyond the reaches of our proletarian imagination. 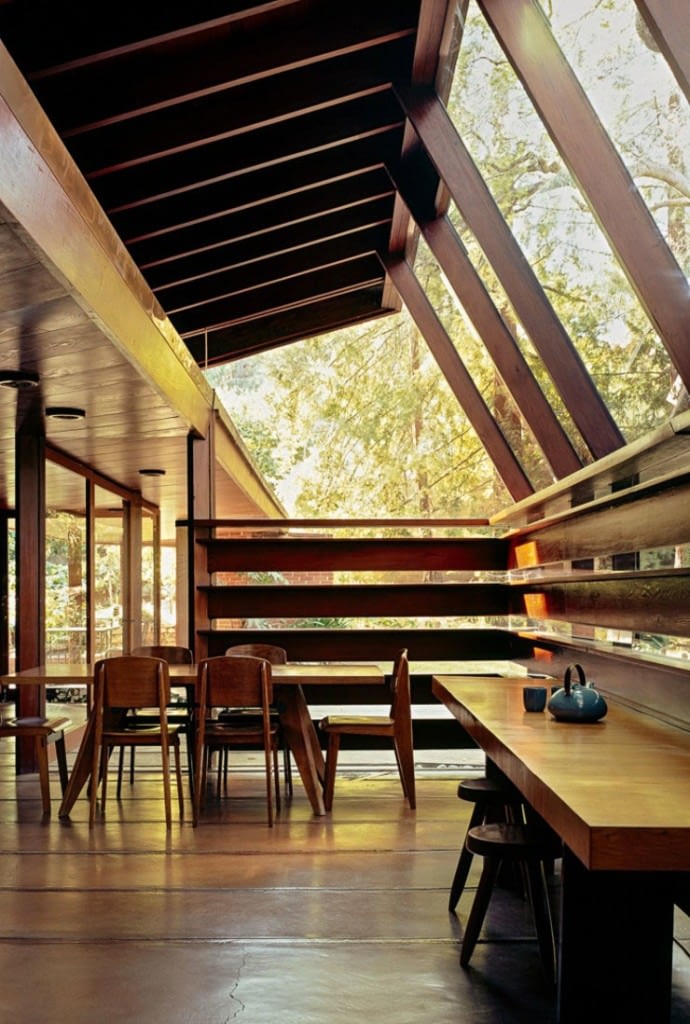 The Lautner House from A Single Man

This is, I concede, not a “Smart Home” in the contemporary sense. It is, however, a very smart home – and, for its time, probably as intelligently designed as a home could be.

It’s the 1960s and Ford’s movie – much like the Christopher Isherwood novel that it’s based on – isn’t science fiction, and the Lautner house doesn’t have any of the futuristic mod-cons one might expect of an on-screen smart home. There are no electrochromic windows, no conversations between the owner and an omnipresent “A.I.” interface with dubious motives. There’s not even a DVD player.

What the Lautner house does have, however, is an abundance of light, perfect mid-century decor and the kind of clean, modern lines that designers and architects still pine over and imitate today. It’s a work of art, and its presence in the film feels like an anchor. Almost as vital, as deeply emotional, and as subtly vibrant as any of the human cast.

While not a total fiction – as it is, in some aspects at least, based on the ultra-hubristic Razor House in La Jolla, California – Stark Mansion does boast a few mod-cons that haven’t quite passed from the Marvel Cinematic Universe our own.

Like the Razor House, and like Iron Man, Stark Mansion is a slick, design-led piece of forward-thinking design and an ultra-modern (if somewhat optimistic) triumph of man over nature.

Theodore Twombly’s apartment from HER 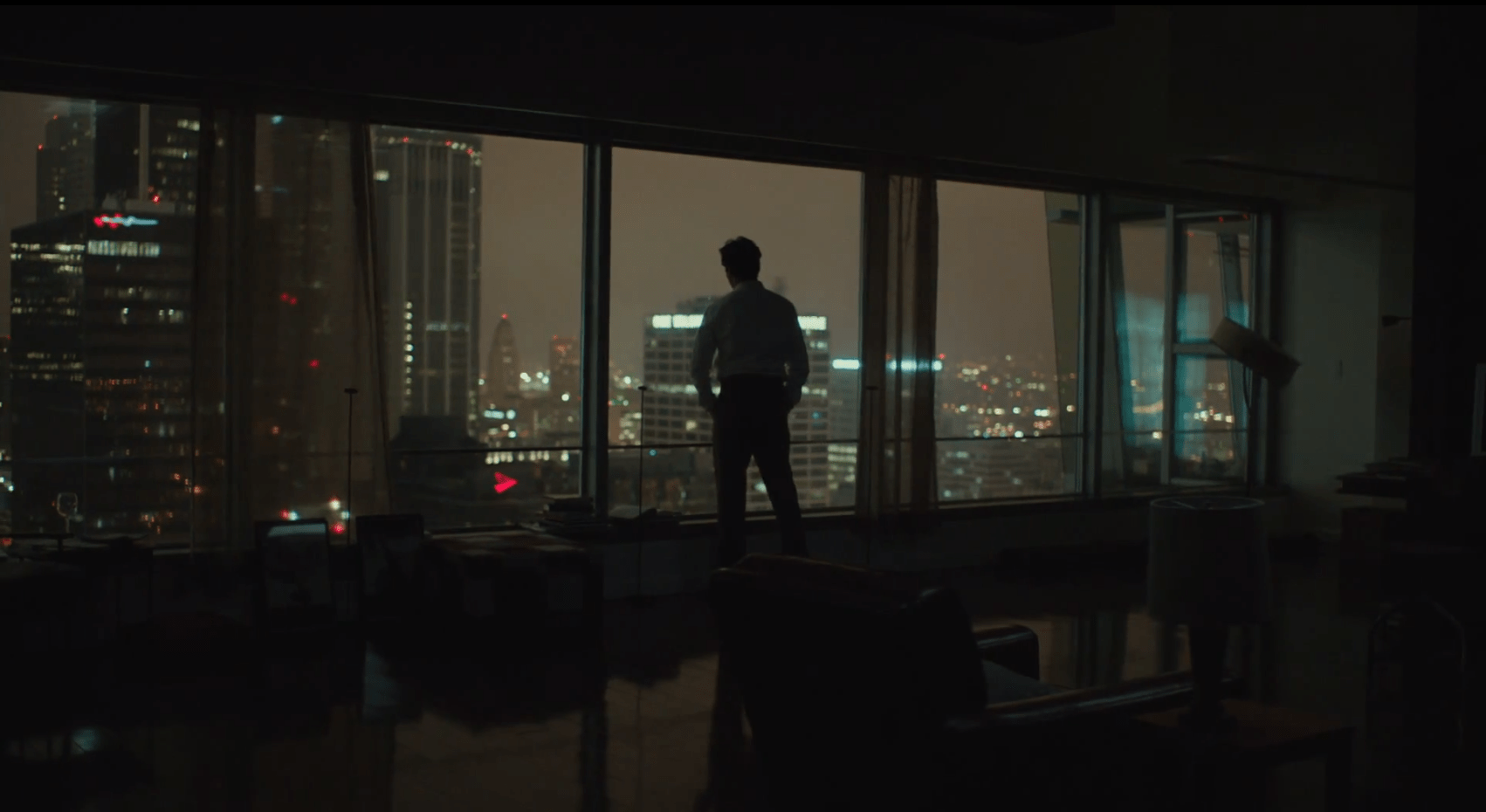 This is something of an honourable mention, really, as Twombly’s apartment isn’t necessarily a “smart home” in and of itself. While the entire premise of the film does hinge on the presence of a new, all-too-human A.I. operating system, that system isn’t really about controlling the environment at all. It’s more about personal interaction than, say, regulating the temperature of the space or tinting the windows at night.

That being said, of course, the apartment in which Twombly (played with a uniquely fragile empathy by Joaquin Phoenix) lives is beautiful of its own accord: its sweeping views of real-life Downtown Los Angeles (with a few extra buildings thrown in for good measure) combined with its tasteful, minimalist decor are truly something special. 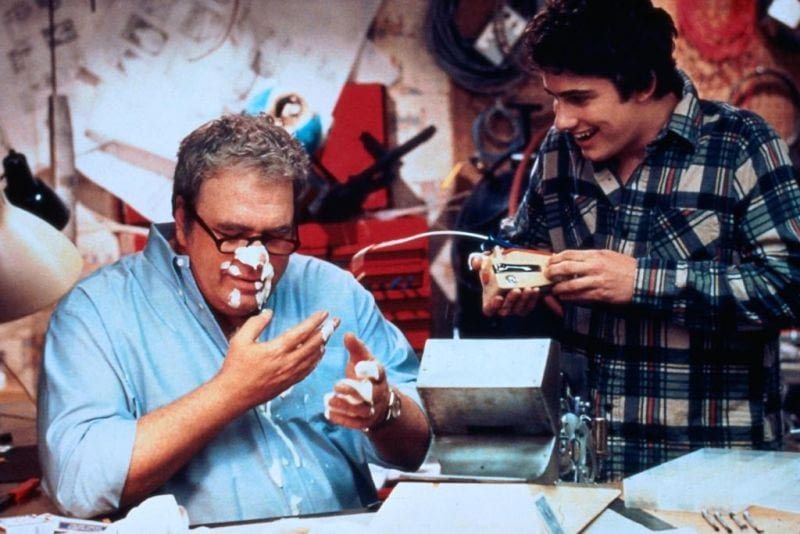 I admit, lumping these two together may seem strange. The vibe of Joe Dante’s 1984 comedy-horror movie and the claymation shorts first created by Nick Park for Aardman Animations back in 1989 are – to put it lightly – not similar at all. And neither are the houses that our erstwhile protagonists call home.

Nonetheless, furry friends and nemeses aside, they do have something in common.

They are both the in-story creation of half-cocked inventors; Wallace’s machines – of which there are many more than his eponymous Wrong Trousers – are the driving force behind most narratives in the series, and much of the action in Gremlins is propelled, when not by the much-loved mogwai Gizmo, by Randall Peltzer’s own contraptions.

Both of these are, technically, smart homes. Both are iconic in their own way. Neither, it has to be said, are very smart at all.

The Starship Enterprise from Star Trek 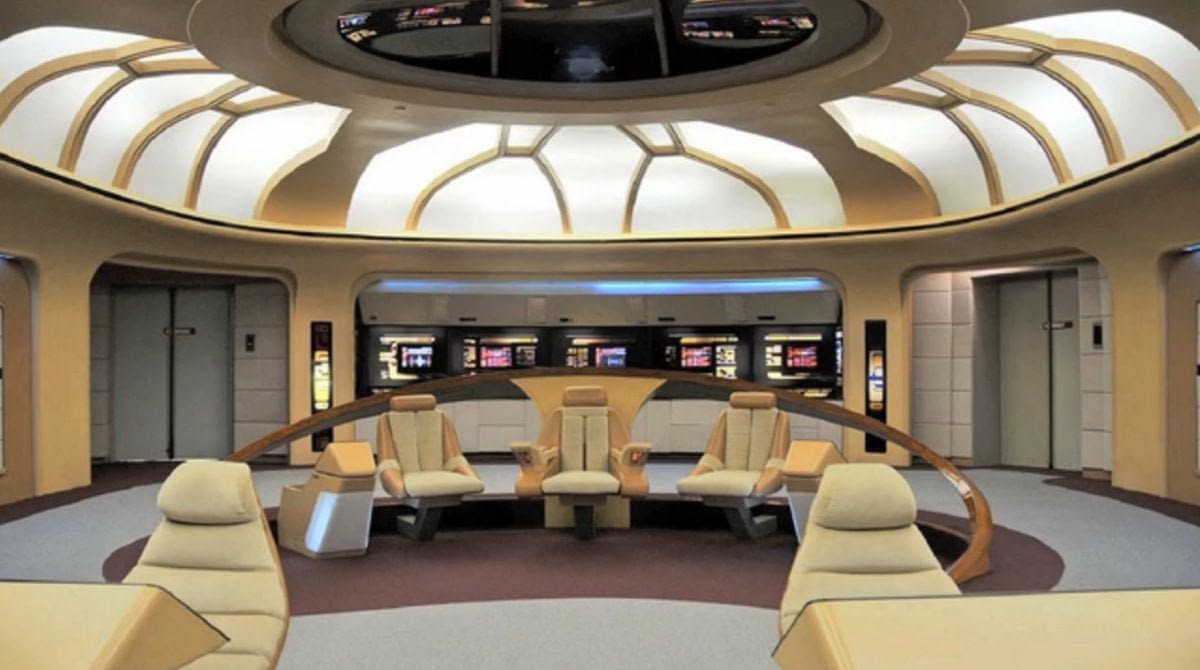 While it’s certainly not a house in the familiar sense, the premise — across every iteration of the show and every film in which it appears — is that the Enterprise is categorically, nonetheless, a home; a safe haven for its crew. All with a strangely art deco-inspired design.

Somewhere between the high-sci-fi of the ship’s “replicators,” which make food and drink – “Earl Grey, hot!” – on command, the holodeck – which does the same thing (albeit less tangibly, though in a fully sensory environment) with places – and the more down-to-earth devices such as voice activation and built-in touchscreens, we find what is essentially the prototype for the modern smart home.