Why all we want for lockdown is a home cinema

‘I must say, I’ve always loved going to the cinema but I haven’t been to one in a very, very long time!’ If this isn’t a good advert for having your own home cinema, I don’t know what is. But when Liz Staples set out to create her beautiful family home in Wimbledon, a dedicated home cinema wasn’t part of the plan. Then Equippd came on board to design the connected technology at Liz’s property, known as the Edwardian Glass House – read all about Equippd’s other work on the project here.

The spare-room-with-a-screen evolved into a full-blown London home cinema experience. I spoke to Liz about the evolution of her bespoke cinema room, which is housed in the contemporary New Basement, a recently carved-out below-ground level, along with an office and gym. (The top floors, called the Old House, make the most of the elegant period features.)

And as the UK goes into a third lockdown, a home cinema is not just a luxury. It’s a safe way to go out while staying in – somewhere to get away from the real world, sit back and be fully immersed in alternative universe for a while.

When considering installing a cinema room, many homeowners believe a multi-functional space is best – for example, a spare room that can be a sanctuary for guests to sleep but also be used as a place for your family to watch films. This was the route Liz was going down. ‘The room where the cinema is now sort of evolved,’ she explains. ‘Originally, it was going to be a spare bedroom with the ability to be used as somewhere where we could watch a movie, so it wasn’t going to be a dedicated space. It wasn’t like we went into it going “we want to have the all-singing, all-dancing cinema room” – we wanted somewhere where we could go and have a really big screen and watch a movie, sport and have a chill-out place away from the main house.’

However, discovering some really special cinema seats in an advert in the paper changed everything for Liz. ‘We’d started by wanting to have comfy sofas in there but I saw these fantastic seats and I think that was one of the turning points of making it into a cinema room. I was like, yep, gotta have these seats! Over time, and after speaking to the Equippd guys about it, we decided to have a dedicated room. And then, really, it sort of evolved.’ 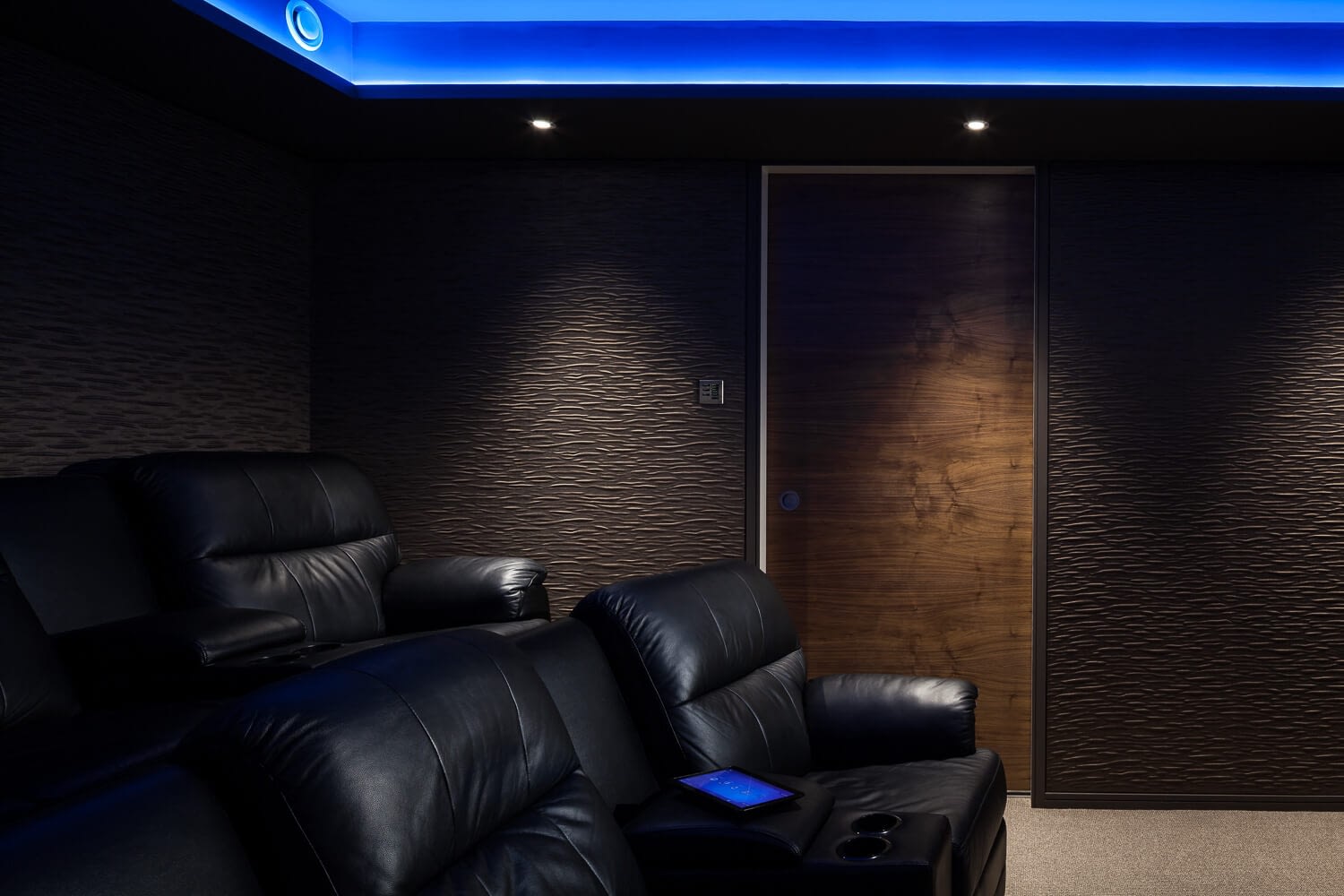 Liz’s cinema room began to take shape. She collaborated with Equippd, whose expertise and network of partners helped inspire exactly what she had in mind. ‘It was a combination of going with Equippd to a specialist company who had various [home cinema] sets out in terms of what we could do. It was certainly there where we found our inspiration, particularly for the textured walls – I was like, right, we need those textured walls! So we managed to source some material that was acoustically transparent – it has to be! – so that was quite challenging.’

Even at the cinema, if you’re not sitting near the right speakers you’re not getting the full experience, whereas in our cinema room, everybody gets a top-notch experience

Equippd’s hands-on process helped Liz envision the project. ‘Equippd worked fantastically, giving us ideas and playing about with the design and taking us to places where we could see things. You know, it’s all very well looking at pictures, but actually seeing things in action, hearing speakers, seeing the screens, all that sort of thing. Because obviously it’s money that you’re spending no matter what you do, and an awful lot of it you have to potentially take a punt on unless you can go and be taken to somewhere that you can say, yes, I can see that working.

‘Where the guys were fantastic was working really hard with us to get a design that we were happy with but that was also functional to allow as many people in as possible. It’s a good size, but actually trying to get the seats in, making sure that everyone could see [the screen] … You know, that’s where I think the word collaboration really comes to mind.’

The home cinema itself is tailored to Liz’s family’s requirements as well as boasting all the latest technology. It has full Dolby Atmos surround sound with 4K visuals, electric reclining seats, a button to easily switch between ‘normal’ or ‘widescreen’ screen sizes and everything is controlled via a wireless touchscreen. 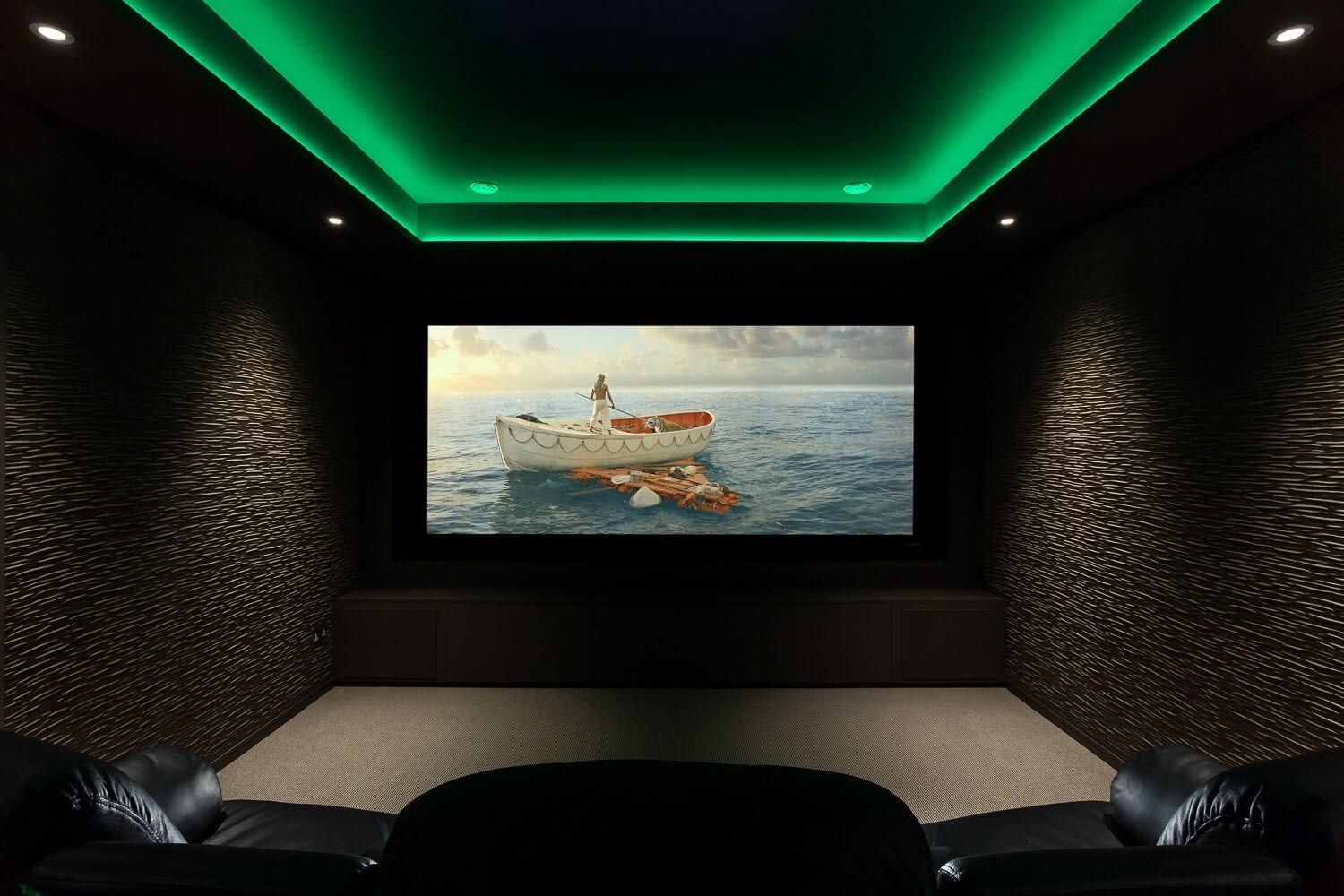 Liz takes me through it. ‘We have seven seats: three in the front and four in the back. The seats recline, although the back ones have to have a limit otherwise they’d hit the wall.

‘We have Control4 to control the screens and light switches by the door, which allow for different lighting depending on what we’re watching – films, sport, that sort of thing! There are various colour options. I have to say, I stick to blue most of the time, but there are different colour options you can go for as well, which can change the atmosphere in the room.’

How does it feel to have your own bells-and-whistles cinema at home? Does Liz miss going out for that movie experience? She has never looked back. ‘Historically, films come out in the cinema before they’ve been able to be used in a home cinema but since the pandemic, films are streaming at the same time they are on at the cinema and it becomes an even better experience, really – you don’t have to deal with people chatting!

‘It’s about the whole set-up – even at the cinema, if you’re not sitting near the right speakers you’re not getting the full experience, whereas in our cinema room, everybody gets a top-notch experience.

‘We do family movies; I’ve had girlfriends round and we’ve done movie lunches; we’ve had friends round for movies at new year. It’s absolutely fantastic for sport – we’ve watched a lot of big sporting events, and my husband has spent a lot of time watching football down there! My eldest has done some gaming and my youngest had a cinema party down there. It’s somewhere to chill – it’s a lovely quiet, calm space, so a group of them just sat down there and chatted in the chairs and had music on – they just had a chill session there without having to be “on screen”.’

Liz’s family love watching action movies on the big screen, revelling in that fully immersive experience: ‘Anything with the action and then you get the surround sound! We loved Black Panther, which was absolutely brilliant, and we’ve watched a lot of the franchises – Mission Impossible, the Bourne Series, and you can’t beat a bit of James Bond. But equally, we watched Lion and it was fantastic watching it on the big screen – we all cried and it was very emotional!’ 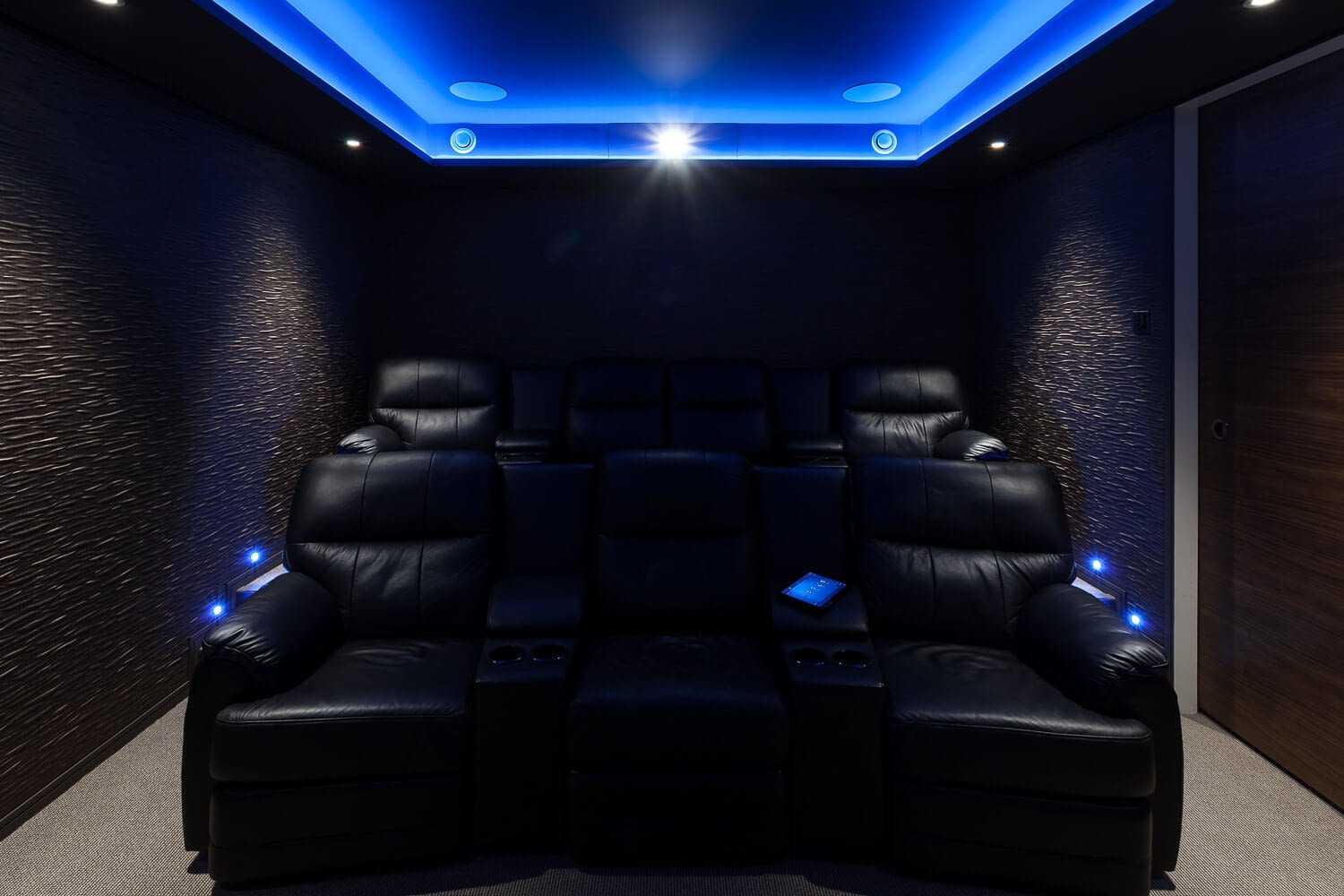 The cinema room is also a sanctuary, too. ‘No matter what your preference is, whether it’s movies or TV or music, going down there and having music on is amazing as well,’ explains Liz. ‘It’s a real get out of the world and chill area, it takes you away. It’s so calm down there, it really is a lovely place to chill out.’

I ask Liz if she thinks installing a home cinema is a good investment for her property. ‘Yes, I would think so,’ she replies. ‘I mean, I couldn’t categorically say that what we’ve spent is what we’ve added to the property, but everybody who comes to the house says “oh my god, this is amazing”. In terms of distinguishing your property, I think it’s a real wow factor to have.’

In fact, Liz’s sister was so impressed with Equippd’s work in the cinema room that she promptly contracted them to recreate their magic in her own home in Gloucestershire. ‘My sister came, saw our cinema and said “we’ve got to do this!” It’s a bigger version but they’ve got the same seats, the same wall covering.’

A private, dedicated space to watch films or chill out with your family – this used to be the preserve of celebrities and the super-rich. But with careful planning and an expert team of professionals collaborating with you, a home cinema could put money on your home as well as being an ideal place to weather the Covid-19 storm.

Want to know more? Get in touch with one of the team here.