How to design the ultimate music room in your home

When it comes to designing the ultimate music room, it’s not just about how it looks, but also how it feels. And it turns out that it’s the little details that make a home studio special. Here, Equippd co-founder Matthew McCourt dishes on how the team created the best home audio experience for their ‘professional hobbyist’ musician client. 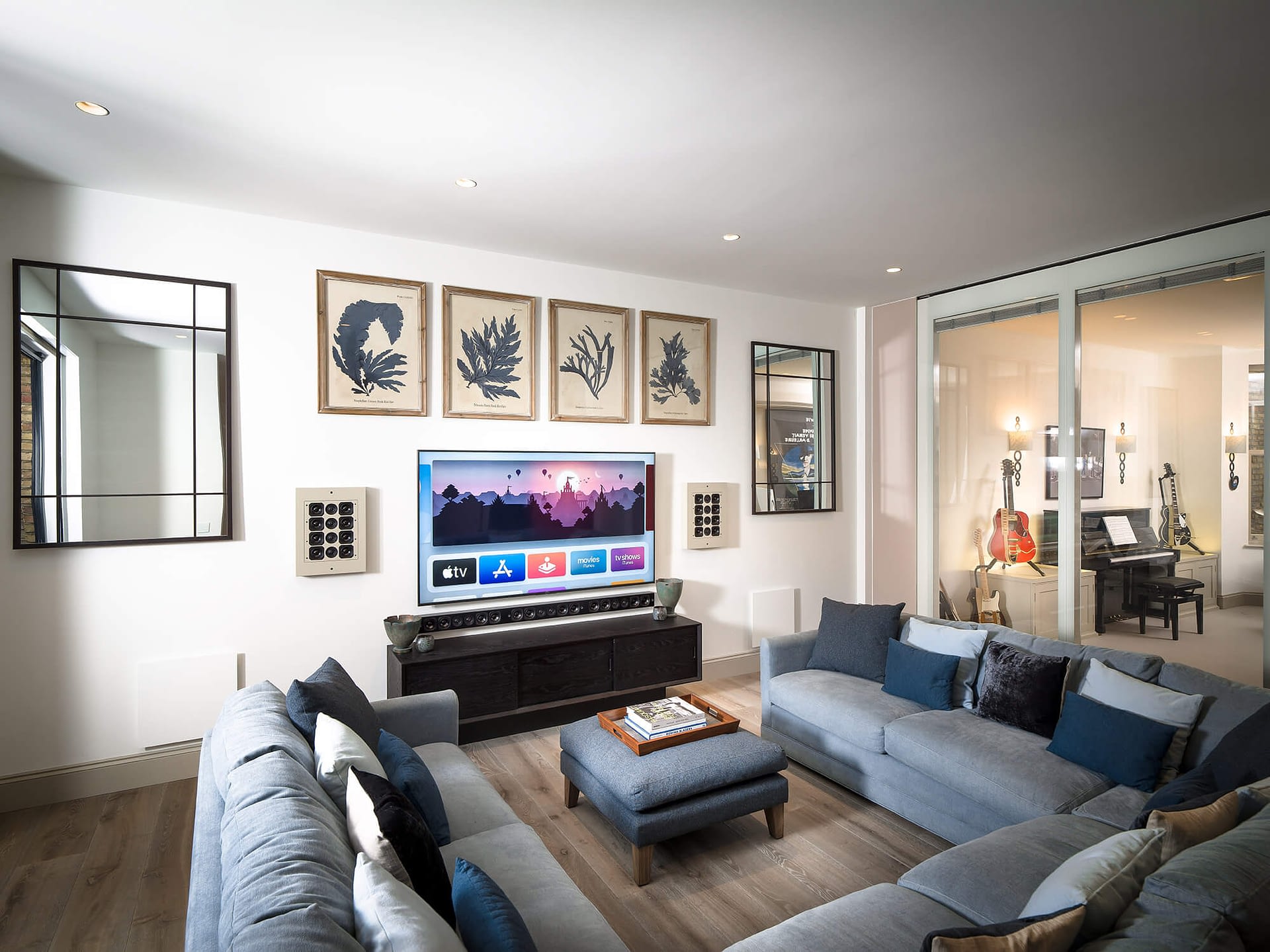 ‘The client doesn’t produce music for a living, solely for fun and enjoyment. But he plays guitars, drums, keyboards, all sorts of things. He wanted a specialist, acoustically treated music studio in his new basement renovation in Wandsworth, London,’ says Matt. ‘There were quite a few challenges involved. We had an idea, found a solution and we got it to work!’

The basement includes an automated ‘glass wall’ that enables it to be opened up into a single space for parties, but also closes and acoustically seals the studio space when required. So, how did they do it?

Our philosophy is that technology should just slip into your life and make it easier, rather than be an overbearing, difficult set of new things that you have to learn

‘The client wanted a music room and an open plan living area and for the two spaces to act as both one space and as two separate spaces. The building contractor didn’t know how to do that on a sound proofing or sound isolation level. That’s where we stuck our head above the parapet, so to speak, and started offering some ideas about how we could use specialised doors to open or close off the space. At the same time, we were also talking about how we would work the area on a technology level, so everything from the audio-visual side to the multi-room audio, intercom, Lutron lighting and security.

‘It’s a flexible space whereby you have a big, open plan area that can be sealed off into two rooms with a partition. That’s quite a common thing in residential and commercial settings. Where it becomes unusual is being able to make those two spaces soundproofed from each other to a certain rating, so that when you do close that partition, one space doesn’t interfere with the other on a sound level.

‘We used a similar acoustic-style build-up that we had previously used to isolate a cinema room from an adjoining room, by layering plasterboard and “resilient bars”. We produced a design for the builders to make the three internal walls to allow that room to be as sealed as possible. The main access door also had to be specialised, so we made a bespoke, acoustically built sound-proofed door that would seal the room from the hallway, which was also part of the main living space.

‘We employed a German company, MultiWal, to design and build a set of three very large triple-glazed acoustic doors to put across the space and seal the area. One of the big challenges and one of the reasons we chose the MultiWal system was because the owners had a really nice engineered wood floor across the whole of the basement and they didn’t want a track running down the middle when the space was open plan.

‘The clever thing about these doors is that they hang from a big acoustic girder above. You’re able to manoeuver them along the track and, as you click the first door into the frame, it creates an electronic seal at the bottom and top. And then you slide the next glass panel into place, which triggers the electronic connection, and do the same with the third.

‘We used Somfy wireless blinds in each of the three panels. Every time you click the panel in, it not only supplies power for the field, but also for the blinds. So when all three panels are in place, the client can go to his Control4 panel or Lutron keypad and press “blinds down” and it’ll drop all three of those blinds down inside the glass panels. They are sandwiched between the two double-glazed panels of the glass.’

Equippd recommended a Control4-controlled air management system for the sealed room. ‘We got a company to create an mechanical ventilation and heat recovery (MVHR) system, which brings fresh air in from outside and takes old, used air out of the room,’ explains Matt. ‘During the winter, it passes the old, warm air over the cold, new air, so it transfers the heat in the room to the fresh air that’s coming in. So you recycle heat. It’s an energy-efficient way of keeping air flowing in a space. During the summer, you then change it so it’s no longer transferring the heat, you’re just bringing in the cool air from outside. And exhausting the hot air.’ 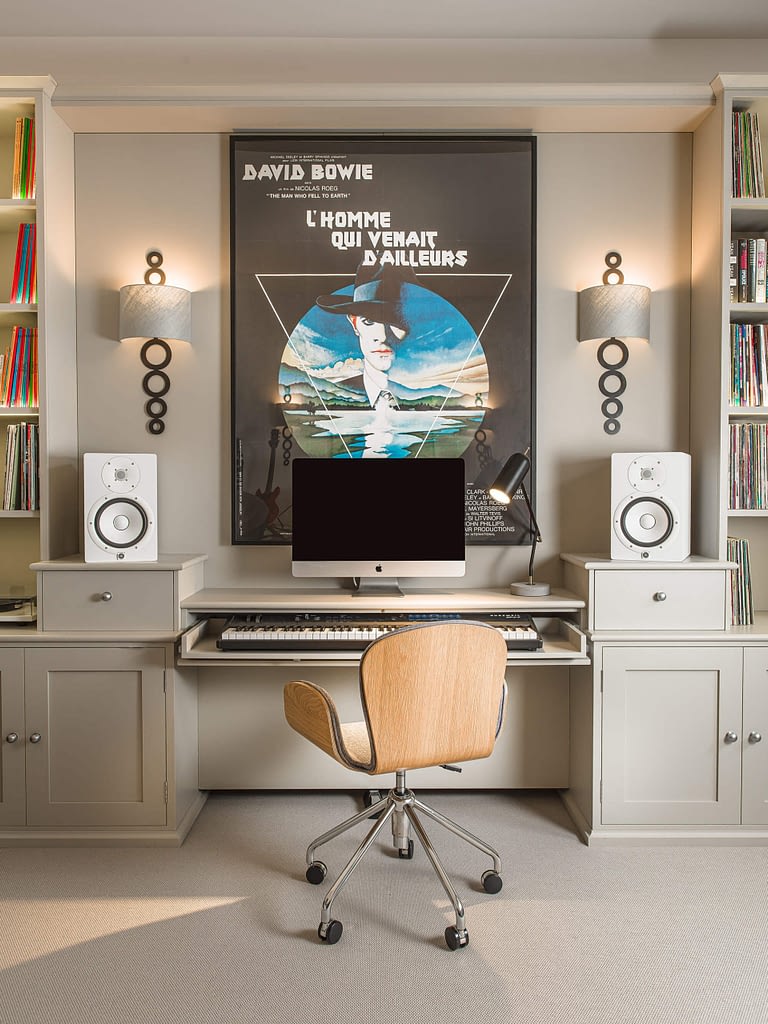 There were several key components Matt considered when designing the music room, from lighting, cabling and multi-room audio to the joinery design. First up, the lighting.

‘Because of the way we had to isolate the music room from the dining room – you’ve got the new structure and the original old flooring above – we created a lighting design in the music studio that did not involve putting any downlights into the ceiling. As soon as you drill a hole into the acoustic build-up on that ceiling, it’s an area of leakage, so the whole structure is compromised and you’d hear everything in the dining room. So, we were able to create a really cool lighting scheme and keep the ceiling a completely sealed unit by using LED strips and in-wall lights.’

The team integrated the home’s Lutron lighting system with the music studio, installing a ‘jam’ button on the lightswitch, which sets the lights, drops the blinds and fires up the room’s electronics to create the perfect atmosphere to play or listen. ‘If he’s got a group of friends over and it’s Friday night, they close off all the doors, acoustically isolate from the rest of the house, hit the “jam” button, which brings up the LED mood lighting, turns the amplifiers to volume 11, and off they go!’ Matt laughs.

‘We also designed and installed his mixing desk and studio monitor speakers. All the power switches are tucked away on the back of the speakers or desk, which is hidden within a drawer. So, for him to be able to walk into the studio and just start using it, he’d have to fiddle behind all the equipment and switch it all on. We put a “desk” button on the lighting keypad next to the main door. If he presses that desk button, we enable the power to all his devices. So, not only does the Lutron button switch on the lights to the exact level he wants when he’s recording, but it also switches on all his desk and studio speakers, ready to go. So he never has to climb behind the equipment to switch it all on.’

Clean lines and no cables 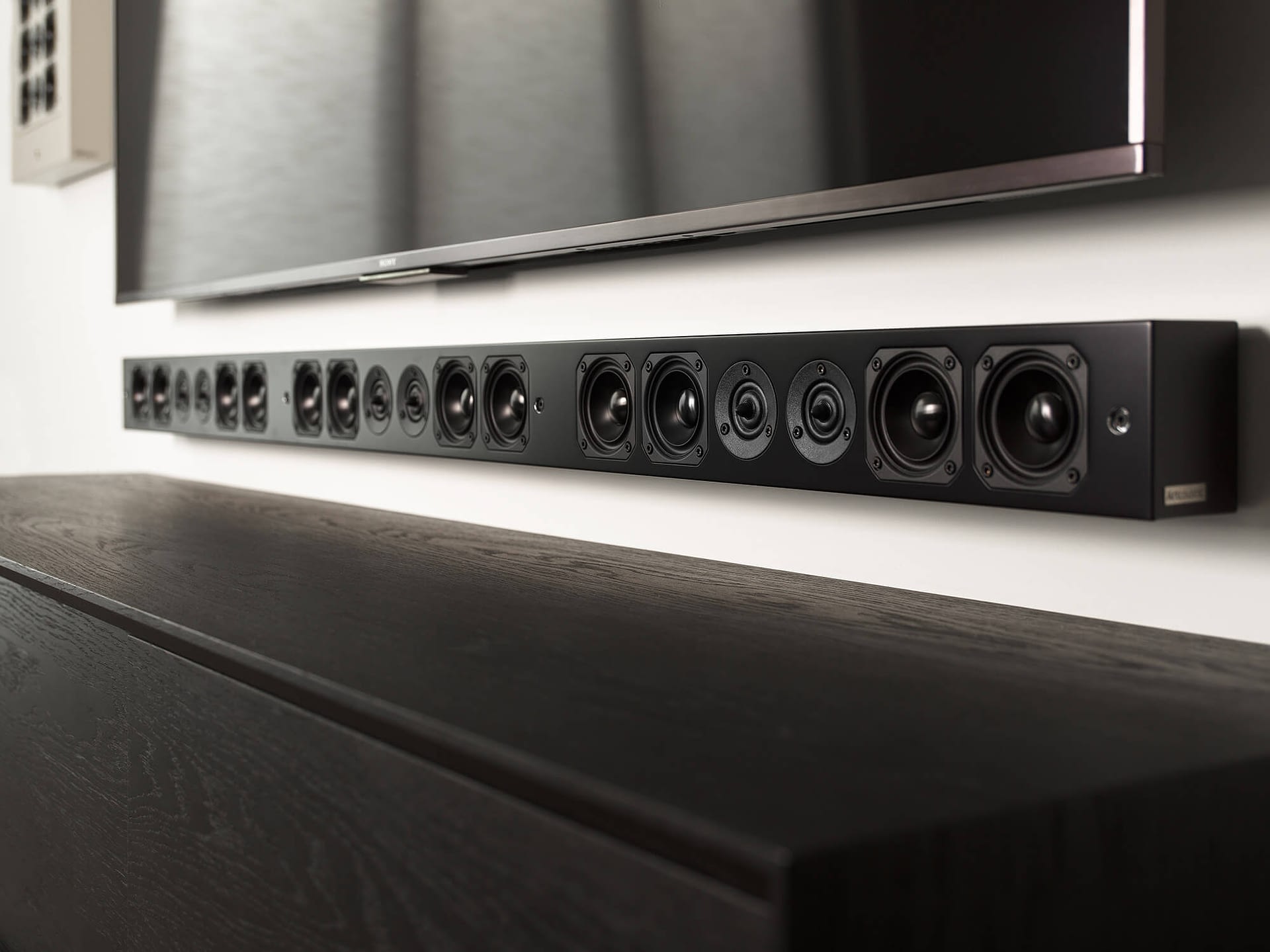 Clean lines and no cables are also an Equippd hallmark. ‘We designed a cabling layout that gave him microphone and instrument points across the room, all leading back to his recording desk. This was so he could plug in his guitar, amplifiers and microphones around the edges of the room and not have all the cabling draped across the middle of the floor back to his desk. It just maintains the “cleanliness” of the room, rather than being like an industrial recording studio.’

The client wanted the ability for what he was recording and playing in the music studio to be streamed across the music system throughout the house. Easy-peasy. ‘We took an output from the studio desk and plugged that into the multi-room audio system so the family could listen in on what was going on in the recording studio throughout any of the rooms in the house,’ explains Matt.

Equippd also had a heavy input on the joinery in the room. ‘His keyboard, for example, is on a desk drawer that slides in and out,’ says Matt. ‘He can work on his desk as normal in there, but when he wants to use his keyboard to record, he pulls it out in front of him. This means he doesn’t always have a keyboard sat in front of him with the computer behind.’

The rest of the space is used as a family area. ‘It has a big u-shaped sofa, Sony OLED TV and a good 5.1 Artcoustic sound system. Everything is centralised back to the hub with nice, simplified control, via Control4. There are Lutron blinds across the whole of the basement floor, for which we had to design recessed channels for them to sit in. This means that when the blinds drop, all the light is cut from the edges to create a blackout effect.’

I ask Matt what made this particular project such a success. ‘Lots of little details,’ he replies.

‘Our philosophy is that technology should just slip into your life and make it easier, rather than be an overbearing, difficult set of new things that you have to learn. For a lot of people, that is the end result because they haven’t really thought about what they need and want. If our technology can achieve those two things: one, fit into their lives, and, two, enhance it and make it easier, then we are doing our job correctly.

‘It’s the simple things like the automatic on-and-off switch in his studio. Every time he goes in there, he’d be behind one speaker, then behind the other speaker, then behind the desk. When you think about doing these things in your daily life, it becomes part of your daily routine  – but the reality is, you don’t have to do that. You just walk in, press one button, everything comes on; walk out, press one button, everything goes off. It’s those little bits of time that you save, which are the things that really fit into people’s lives and make it easier.’